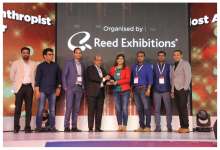 Mumbai: Viviana Mall, one of the leading destination mall was recognised as the ‘Most Admired CSR-Compliant Philanthropist Shopping Centre of the Year’ at the prestigious MAPIC India Awards 2021. The award category exemplifies the outstanding CSR efforts and social improvement influencers in the retail space. Viviana Mall earned the award for its innovative, socially relevant and high-impact campaign, #MeraFarzHai. The award win follows on from multiple awards for the same campaign, including silver at the regional level and a bronze at the national level for ‘Best Online Promotion’, at Afaqs Foxglove Awards in 2020

Viviana has been at the forefront of CSR initiatives and has consistently conceptualised and sustained award winning campaigns addressing different issues that impact the marginalised sections of the society. The mall was selected the best of the best in the CSR category for its #MeraFarzHai campaign, a pioneering effort to address and report sexual harassment against women in partnership with Thane Police as part of Viviana Mall’s ExtraordiNaari program on Women’s Day. The idea was to encourage everyone to make it their responsibility to ensure the safety and security of women across the board and contribute towards ending this menace that plagues society.

As part of the overall campaign that encompassed social media, newspapers, digital, television and theatres, a short film was screened in approximately 150 screens in the Mumbai Metropolitan Region.

A special self-defense training workshop was also organized at the event conducted by a leading martial arts practitioner who has over 30 years of experience in training women across the armed forces, police and even the BSF. A flash mob was also performed by a leading dance group to support and share the pertinence of the message, #MeraFarzHai.

The campaign received over 18 million views across different social media platforms. The campaign was recognised in India and abroad that led to similar campaigns being launched by Ontarian government and L’Oreal Paris. Inspired by Viviana Mall’s initiative, Ontarian government launched #WhoWillYouHelp in September 2020 followed by #StandUpAgainstStreetHarassment by L’Oreal Paris, in November 2020. The campaign film was also reposted by the Telangana State Police on their social media handles.

The campaign was well received and provoked a critical debate on gender sensitization and safety of women in public places. This led to the second edition of #MeraFarzHai 2.0 where the mall highlighted and lend voice to another serious issue faced by women, Domestic violence, that was further intensified by the pandemic.

Commenting on the success, Ms. Rima Kirtikar, Chief Marketing Officer, Viviana Mall said, “It is a great honour to be recognized for our CSR initiatives, and reinforces our efforts towards leading impactful conversations through socially responsible initiatives that influence change. The trust that our customers have placed upon us has not just helped us grow into a leading destination mall but also strengthened our commitment towards social initiatives that impact the society at large.  We are humbled by this recognition and encouraged to lead social transformation through many such impactful initiatives.”

Launched in 2015, Viviana Mall through its flagship campaign - ‘ExtraordiNAARI’ aims to take up various women centric social causes and aims for the betterment of women in society by creating awareness and a long-lasting impact on society.

In 2018 Viviana Mall launched #STOPACIDSALE campaign where they highlighted unheard and untold stories of acid attack survivors in India. The entire concept was taken a notch ahead, where the acid attack survivors walked the ramped at a leading Fashion Week. Viviana Mall was lauded for its innovative and socially relevant campaign against the sale of Acid aimed at prevention of an ever prevalent social malaise of scarring caused by Acid Attacks at the ICSC Gold Asia Pacific Shopping center awards 2018, followed by ICSC VIVA Best of Best Award at Las Vegas in May 2019 for the same initiative.

In 2019, the Mall applauded Women on Wheelchair through their campaign #RespectWomenOnWheelchair. This campaign was in association with the NINA foundation, which aimed to portray women who have broken through the shackles of disability and achieved success in their respective fields despite facing challenges. Through ExtraordiNAARI Viviana Mall aims to facilitate changes in the society in the coming years.

Viviana Mall, a well-known ‘Destination Mall’ by the Ashwin Sheth Group, was built to give an experience to its audience. Encompassing one million square feet, Viviana Mall covers over 250 leading brands in its prime retail and leisure space. Established in 2013, the mall is India’s first and only visually impaired friendly mall and has also launched “XRCVC-Viviana Extension” a resource centre for visually impaired.