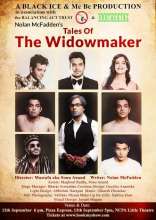 SYNOPSIS: Tales of a single-minded and brutal theater and film director, told through his favorite lead actor, who believes so much in his artistic vision that it is the only thing which matters to him!

Born of the twisted collaboration between a hardworking actor and a brilliant and savage director, ''Tales Of The Widowmaker'' spins the stories of the most avant-garde and ingenious director of the 21st century and his tormented lead actor, diving to the depths of depravity to pull the finest performances out of abuse, humiliation.... and torture! Is the director really a genius or is he just plain crazy? Is he helping the actor achieve higher goals, or dragging him down into slavery? In the end, it is the actor who has to decide and take his life in his own hands, choosing between being his own man, or remaining a puppet in the hands of the director who cares only for his own mad vision.

Buy tickets for the event online at bookmyshow