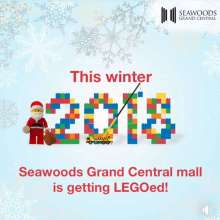 Commenting on this mega launch, Mr. Atsushi Hasegawa, General Manager, Emerging Asia, The LEGO®® Group said, “We are delighted to launch this one of a kind event in India. This is our biggest event in India till date and we are confident that the event will enjoy success amongst our consumers from across age groups. Festivals have been an integral part of Indian culture and our efforts have always been focused on uplifting the festive spirit in unique ways through our varied range of products and activities. Over the course of this Christmas carnival spanning over 24 days, we are aiming to create the India’s longest LEGO® train with the help of LEGO® fans in India. Kids can build the train, run them, be part of speed run contest and create joyous memories at the photo booth. We are also bringing in an immersive opportunity where children can hop on to a larger than life static train setup and experience a panoramic view of the train running through the LEGO® landscape using VR glasses.”

Along with LEGO® extravaganza, Navi Mumbai’s Ultimate Fashion Destination is all set to lure its patrons with 45 days of Asli Happyness Wala Sale. Starting December 14, most brands at the mall would offer great discounts until January 31, 2019. In yet another first, SGC Mall will host a FLAT 50% OFF Sale for duration of five consecutive days from December 21 to 25 with participation from over 200 brands.

SGC Mall will also host the third edition of the *99 Sale, as a part of the Asli Happyness Wala Sale on January 11 – 12 – 13, 2019. This year, *99 Sale will also see an introduction BURPY!, an in-house food connoisseur, who will be reviewing the wide range of cuisines available at the food court. He will also give out several food combo’s ending at a price point ending in 99. Like last season, there are over 25 brands which are expected to be a part of the *99 sale at SGC Mall.

While speaking about the enormous success that SGC Mall has seen since their launch, Mr. Nilesh Singh, Centre Head, Seawoods Grand Central Mall said, “We at SGC Mall have been constantly trying to break the clutter and come up with industry innovations and this year’s LEGO® Christmas Carnival has several first to its credit. We are partnering with The LEGO® Group to build the longest LEGO® train in India. In addition to that, the 45 days of Asli Happyness Wala Sale will also have several firsts to boast about. Riding on the success of our *99 Sale last year, this time around we are going to host our third edition of *99 Sale along with the first ever 5 days of FLAT 50% Sale and give Navi Mumbaikars an opportunity to shop for their favourite fashion brands at Seawoods Grand Central.”

For shoppers, the fun doesn’t end here as the mall aims to add more thrill to the shopping spree with the introduction of multiple contests. Customers who shop for Rs 5,000 and more will be eligible for a lucky draw and will stand a chance to win over thousand gratification opportunities such as Hyundai Car, International trip for 2 lucky families, home décor, luxury watches, accessories, gift vouchers and many more.

Seawoods Grand Central (SGC) Mall, located at Navi Mumbai, is a part of Nexus Group of Malls. Nexus Malls is a fully owned subsidiary of the Blackstone Group, world’s leading Private Equity firm. Owned by Nexus Malls, the asset is destined to be crown Jewel of Navi Mumbai with the retail mix it has to offer, entertainment avenues, multiplex and F&B options Anchor stores like Big Bazaar and Lifestyle greet the commuters at the exit of Seawoods Railway station, thus bringing in a whole new consumer experience of convenience fashioned with grandeur. The 4 storied (Ground + 2 with a Lower Ground floor)  mall houses 300 retail stores and a food court to accommodate 1200 people at once.

SGC Mall aims at transforming Navi Mumbai landscape through fashion, food, entertainment and technology to make it fit for a Smart City. Over the last one year, the mall has entertained its guests with lots of innovative activities such as augmented reality show, Pictionary and Digital Dussehra and soulful musical events with leading musicians and bands such as Papon & Jonita Gandhi and Euphoria. Going forward, the mall will also look at introducing various innovative concepts & engagement ideas to ensure Navi Mumbaikars do not need to travel for miles to meet their needs – Both shopping and entertainment.

ABOUT THE LEGO®® GROUP

The LEGO®® Group is a privately held, family-owned company with headquarters in Billund, Denmark, and main offices in Enfield, USA, London, UK., Shanghai, China, and Singapore. Founded in 1932 by Ole Kirk Kristiansen, and based on the iconic LEGO®® brick, it is one of the world's leading manufacturers of play materials. Guided by the company spirit: "Only the best is good enough", the company is committed to the development of children and aims to inspire and develop the builders of tomorrow through creative play and learning. LEGO® products are sold worldwide and can be virtually explored at www.LEGO®.com. LEGO®, the LEGO® logo, the Minifigure, and the brick and knob configuration are trademarks of The LEGO® Group.