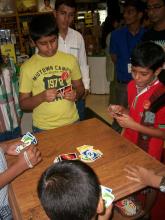 Mumbai, 18 September 2013: For over four decades, UNO® has created memorable moments for millions of families around the world with its fast paced fun and universal appeal. From its inception as a card game, today the UNO® brand is available on multiple platforms for anytime, anywhere plays. For the first time in India Mattel invited all UNO fans to participate in the Asia UNO Challenge. It is one of the most popular UNO tournaments in Asia held annually in Japan since 2006, where thousands of Japanese elementary and junior high school children compete against each other. This year, for the first time ever, Mattel has taken it to the next level by launching the search for the ultimate Asia UNO Champion – with 7 countries competing in the 2013 Asia UNO Challenge in Japan; India being one of them. 10 semi-finalists from Mumbai, Delhi, Pune, Bangalore and Chennai will compete on Sunday, 22nd September 4:00 p.m. onwards at Infiniti Mall, Andheri at Landmark to represent India in Japan for the Championship.

Come cheer the kids as they indulge in a fast and fun game of UNO.

Mattel Toys (India) Private Limited is a subsidiary of Mattel, Inc., the worldwide leader in the design, manufacture and marketing of toys and family products. In India, the Mattel family is comprised of such best-selling brands as Barbie®, the most popular fashion doll ever introduced, Hot Wheels®, Matchbox®, and Scrabble®, as well as Fisher-Price® brands, including a wide array of entertainment-inspired toy lines. In 2011, Mattel was named as one of FORTUNE Magazine's “100 Best Companies to Work For” for the fourth year in a row, and also is ranked among Corporate Responsibility Magazine's "100 Best Corporate Citizens." With worldwide headquarters in El Segundo, Calif., Mattel employs approximately 30,000 people in 43 countries and territories and sells products in more than 150 nations. In India, the company has a strong presence in the branded toys market and is committed to delivering superior quality and safe toys and family products with high play value. At Mattel, we are "Creating the Future of Play."