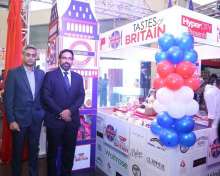 HyperCITY Retail (India) Ltd. today inaugurated Tastes of Britain – a festival that brings together an exclusive collection of forty British brands together for the first time in India in one store – HyperCITY, Malad. Mr. Kumar Iyer, British Deputy High Commissioner to Mumbai and Director General UK Trade, Economics and Prosperity and Mr. Ramesh Menon, Chief Executive Officer, HyperCITY Retail (India) Ltd. unveiled Tastes of Britain along with other dignitaries amidst a large gathering.

Much to the delight of those gathered at the store Mr. Kumar Iyer & Mr. Ramesh Menon took the lead and participated in a live cooking session where they tested their culinary skills using all-British products that were on showcase. They also joined customers in sharing and eating the food cooked during a product sampling session in the store.