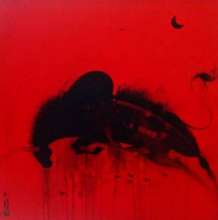 What: Painting Exhibition – ‘The Bull’ in Mumbai for the first time

Description: The man and beast relationship is traceable from the earliest imagery created by man with one animal appearing more than any other - The bull. For thousands of years, ‘The bull’ is being worshiped, mystified, dominated as a symbol of man as a virile, strong, courageous being, with hot red blood running through his veins.

In Egypt, the bull was worshiped as Apis, the life-force/power, where in Hindu mythology, Nandi appears as the primary vehicle and the principal follower of Shiva. To depict the sense of power, today, ‘The Bull’ occupied a prominent place outside The New York Stock Exchange too to become a phenomenon.

The Bull – in all its shapes and forms are being discovered in a very unique way through more than 70 paintings on the bull by 20 artists.

India’s first ever Art Exhibition on ‘The Bull’ will be open from 10th December to 12th December 2015 at Kanakia Wall Street.