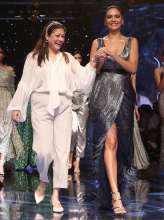 Esha Gupta sets the ramp on fire as she walks the runway for Not So Serious by Pallavi Mohan on Day 1 of Lakmé  Fashion Week.

Delhi based designer Pallavi Mohan showcased an eclectic collection based on the infamous Manhattan nightclub and discotheque. One of the first to introduce professional lighting, theatrical sets, celebrity-­‐only guest lists; the club brought the disco subculture of the 70’s into the public’s direct view and set the standard for the indulgent drug fueled excesses that defined the roaring 70’s. Studio 54 might have shut down in a mere 33 months, but it set the benchmark for the extravagant & hedonistic fashion of those times; elements of which are in the fashion firmament more than 3 decades later.

Glamorous, sinful, ultra - feminine silhouettes are accentuated with high shine liquid look surfaces. Sheer flowing dresses, sexy off-shoulders and halters form a major part of the collection. Oversized blouses with billowing sleeves and voluminous shapes reflect the party movement. Jewel inspired colors, emeralds & turquoises capture the decadence of the times. While lame, shiny satins & rich velvets capture the exuberant mood. Feathers, crystals & a smattering of sequins are key elements of the surface ornamentation. Way too much seriousness in the world today, so it’s good to look back to those wild days. Join in for a celebration of those carefree times and party with us, swinging simply to the setting of Studio 54.